Since 1996, millions of patients have been prescribed Elmiron in order to treat their interstitial cystitis (IC), otherwise known as painful bladder syndrome. But there is now reason to believe that this drug may cause a serious eye condition in those taking it, one that may result in blindness.

This condition is a form of maculopathy – the degeneration of the macula, the central part of the retina. Maculopathy’s first symptoms are blurred vision, dark spots, trouble focusing, and other impairments: as it progresses, it may lead to total blindness.
​
As the evidence has piled up, the manufacturer of Elmiron – Janssen Pharmaceuticals –  has failed to warn the public about these risks. Millions of people are taking a drug that may one day rob them of their vision, and an untold number may have already suffered serious health conditions. 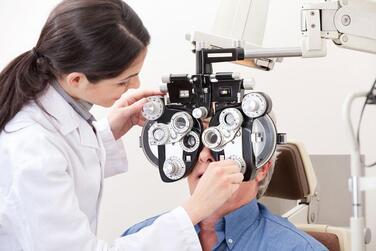 A New Danger Comes To Light

​​The potential risks associated with Elmiron were unknown until 2015, when doctors at Atlanta’s Emory Eye Center encountered an eye condition they hadn’t seen before in six women. This form of maculopathy didn’t seem to have a cause, but further investigation revealed that all six women had been under long-term use of Elmiron for years.

Maculopathy or macular degeneration is painless.  Medication users may not even notice any vision problem, because the healthy eye compensates. The initial symptoms of pigmentary maculopathy typically include:
Image distortion (metamorphopsis), where objects appear deformed and/or smaller.
When the affected part is the macula (fovea) central portion, a central spot appear, where patients cannot                       see.
As a result, these symptoms could lead to:

​Is maculopathy caused by Long-Term Use of Elmiron?

​In 2018, researchers at the Emory Eye Center at the Emory School of Medicine in Atlanta alerted the public that taking Elmiron is linked to the retinal condition, maculopathy.  Pentosan polysulfate sodium can cause severe vision problems and side effects, including interstitial cytitis, and even blindness.

Nieraj Jain, M.D., of Emory Eye Center in Atlanta, Ga., reported that six Elmiron patients who had been taking Elmiron for about 15 years had developed unusual changes in their macula.

Because nothing in the patients’ medical history or diagnostic tests explained the subtle, but striking pattern of abnormalities, Dr. Jain and his colleagues raised a warning flag that long-term use of Elmiron may damage the retina.

The retina is a thin layer of tissue that lines the back of the eye on the inside. It is located near the optic nerve. The retina receives light that the lens has focused and converts the light into neural signals. It then sends these signals on to the brain for visual recognition

All patients in the study reportedly showed signs of retinal disease and that the youngest patient in the study was diagnosed with interstitial cystitis at 23 years of age. That patient began taking the medication daily and began showing visual symptoms by the age of 30. In addition, three ophthalmologists conducted a review of patients at Kaiser Permanente in Northern California and found that approximately one-quarter of patients with significant exposure to Elmiron showed definite signs of eye damage.

It also found the medication could potentially be linked to retinal conditions, such as age-related macular degeneration or pattern dystrophy. Patients who have used or are using the pentosan polysulfate sodium drug Elmiron are advised to be screened by ophthalmologists if they are experiencing any unusual eye symptoms.  They are also advised to cease pentosan therapy if eye disease is present.

What Is The Criteria for Filing An Elmiron Lawsuit?

How Much Are Elmiron Settlements?

​The litigation against the pharmaceutical company is new so there are no Elmiron settlements yet.  For most drug manufacturer lawsuits, the cases can take several years before there are any compensation payout amount determinations. When it gets to that stage of the litigation process, there is a specific claim submission process.  Every Elmiron lawsuit claimant will submit a claim detailing their injuries and side effects and they are supported by the medical records.  The claimants with more serious injuries will receive higher settlements. The loss of vision or decrease in vision is life-altering for the patient and family.  We expect these eye damage lawsuits to result in substantial settlement payouts.

​​If you or a loved one took Elmiron and have been diagnosed with maculopathy caused by Elmiron, you could be owed compensation for medical costs, pain and suffering, lost wages, and other damages. We want to help you fight to get it.  Our clients never have to pay any fees upfront, and the consultation is always free and discreet and free. An Elmiron Lawyer can explain the process and answer any questions you may have.  We take all cases on a contingency basis which means we do not get paid unless we win your case. Call an Elmiron Lawyer about an Elmiron Eye Damage Lawsuit.