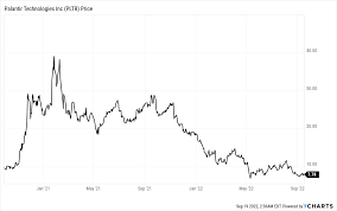 The Palantir class action lawsuit alleges that defendants failed to disclose that: (i) Palantir’s investments in marketable securities were having a significant negative impact on Palantir’s earnings per share (“EPS”) results; (ii) Palantir overstated the sustainability of its government segment’s growth and revenues; (iii) Palantir was experiencing a significant slowdown in revenue growth, particularly among its government customers, despite ongoing global conflicts and market disruptions; and (iv) as a result, Palantir was likely to miss consensus estimates for its first quarter 2022 (“Q1”) EPS and second quarter 2022 (“Q2”) sales outlook.
​
On May 9, 2022, Palantir issued a press release announcing its Q1 financial results and guidance for Q2.  For Q1, Palantir announced adjusted EPS of $0.02, compared to analyst estimates of $0.04 per share, noting on a conference call that the “[f]irst quarter adjusted [EPS of] $0.02 . . . includes a negative $0.02 impact driven primarily by unrealized losses on marketable securities.”  Palantir also disclosed that government revenue grew by only 16% year-over-year for Q1, representing a significant slowdown in revenue growth compared to prior quarters, and that, for Q2, Palantir expected $470 million in sales, compared to estimates of $483.76 million.  Palantir’s significant decline in revenue growth, particularly from its government customers, surprised investors, especially given the ongoing geopolitical instability and other disruptions caused by, among other things, the ongoing COVID-19 pandemic and Russo-Ukrainian War – that is, precisely the type of destabilizing conditions that Palantir had previously touted as tailwinds for its business.  On this news, Palantir’s stock price fell by more than 21%, damaging investors suffered losses in Palantir stock.

The Lead Plaintiff Process in the Palantir Class Action Lawsuit

How Can a Palantir Stock Loss Lawyer Help Me?

Contact Palantir stock loss lawyer Timothy L. Miles today about a Palantir class action lawsuit
​A Palantir Stock Loss Lawyer is well-versed in the complex laws that govern the securities industry and litigation. A Palantir Stock Loss Lawyer focuses on representing individual investors or funds who have been the victims of fraud or who have disputes with investment professionals. Ordinary individual investors, including civil servants, teachers, nurses, and retirees, may need a securities lawyer. In most cases, if they have lost money due to mistakes, incompetence, or fraud by an investment professional. While FINRA, the SEC, and state securities regulators serve a vital role in protecting investors, they simply have too many individuals, firms, and market transactions to monitor to discovery every act of fraud or negligence. Individual investors should consult with a securities lawyer if they have lost money due to fraud or stockbroker misconduct, such as a Palantir Stock Loss Lawyer who will work to recover the losses you sustained through a Palantir Class Action lawsuit.​

​If you suffered losses in Palantir stock, contact Palantir stock loss lawyer Timothy L. Miles today about a Palantir class action lawsuit, and see what a Palantir Stock Loss Lawyer can do for you.  We take all cases on a contingency basis which means we do not get paid unless we win your case.