Research on the link between paraquat and Parkinson’s disease is “about as persuasive as these things can get.” – Fred Kamel, scientist with the National Institutes of Health. 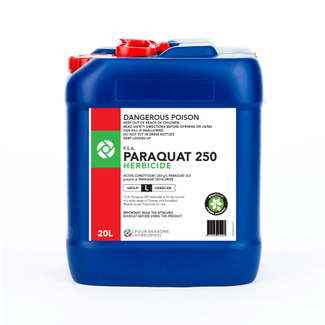 Frequent paraquat exposure linked to the development of Parkinson's disease
Paraquat, a restricted use pesticide, was first manufactured in 1961 and rapidly became one of the most common herbicides in the world.  It is also one of the most dangerous.
​
Scientists have long known that paraquat, often referred to as Gramoxone, is acutely toxic. Dubbed “highly poisonous” by the U.S. Centers for Disease Control and Prevention (CDC), it is so toxic, in fact, that a single sip of the herbicide can kill an adult. Paraquat’s toxicity causes massive damage to the mouth, stomach, and intestines. Once this deadly substance enters your body, it creates fatal interactions in the lungs, kidneys, and liver. But in recent years, evidence has accumulated showing that repeated long term exposure to paraquat in low doses may be linked to the development of Parkinson’s disease.

According to one study, frequent exposure to paraquat increases the risk of Parkinson’s by 150 percent. More than 60 countries have banned the use of paraquat, including China. However, the U.S. Environmental Protection Agency (EPA) has done little to restrict its use, despite growing health concerns and legal challenges over the herbicide’s connection to Parkinson’s. Syngenta, the main producer of paraquat, denies that there is a definitive link between paraquat and Parkinson’s despite numerous, well-documented studies to the contrary.

But with paraquat use increasing in the U.S., agricultural workers and farmers and those living in close proximity, continue to face exposure risks. Many have already filed lawsuits claiming that they developed Parkinson’s disease as a result of long term exposure to paraquat and that Syngenta failed to warn about this serious risk.  The Center for Biological Diversity told Agriculture.com, “Not only are we reapproving paraquat when the rest of the world is banning it, but we’re using more of it than ever before.” The center also said paraquat was harmful to small mammals and birds in addition to potential human risks.

Paraquat Brand Name
Since it was first introduced in 1962, paraquat-based products have been sold by Chevron Chemical Company, Syngenta and other companies under a variety of brand names, including:
FAQs
How Is Paraquat Used?
Paraquat, while a a restricted use pesticide, is widely used by farmers in the production of crops, including corn, soy, cotton, peanuts, wheat, almonds, strawberries, grapes, sweet potatoes, and others. Its use has doubled over the past decade and is expected to grow due to its effectiveness on “superweeds” that have developed resistance to glyphosate (i.e. Roundup). It can also be used for the desiccation of crops, such as cotton, prior to harvest. In total, farmers apply more than 10 million pounds of paraquat each year. In other words, exposure to Paraquat has increased significantly.
​
Because of its toxicity, the EPA classifies paraquat as a “restricted use pesticide.” Only certified applicators who undergo EPA-approved training are able to use paraquat products. There are no homeowner uses for paraquat and the herbicide may not be applied in residential areas or around schools, parks, golf courses, or playgrounds.

People who work with, or live adjacent or nearby the following crops, are the most likely to have long term paraquat exposure:
PARAQUAT EXPOSURE MAP 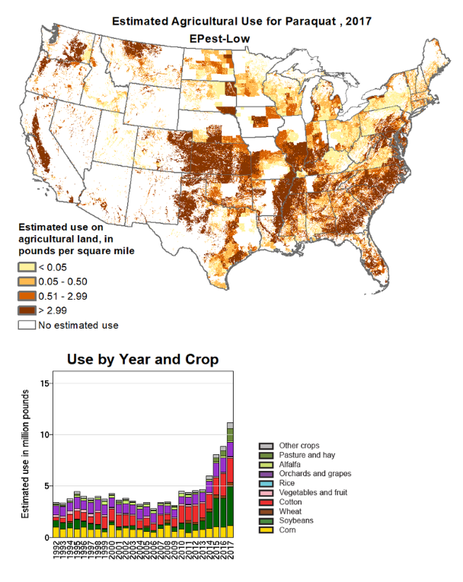 Long term exposure to paraquat by region, crop and year

Frequent exposure to paraquat substantially increased the risk of developing Parkinson's
Is There a Link Between Parkinson’s Disease and Long Term Paraquat Exposure?

​Scientific research has concluded that those who use paraquat are twice as likely to develop Parkinson’s disease in the future. Not only that, but those who live in an area where paraquat is used are also at risk, as the wind can carry the airborne chemical into neighborhoods and other populated areas can resukt in significant pexpoaure to paraquat. Despite numerous scientific studies into paraquat’s safety, the company responsible for the pesticide refused to acknowledge the potential risks of long term exposure and exposed thousands of innocent individuals to a hazardous chemical for over a decade, even though it is a restrictee use pssticide.

What is the Scientific Link Between Frequent Exposure to Paraquat and Parkinson’s Disease?
Numerous scientific studies have linked paraquat exposure to Parkinson’s. A large 2011 study of U.S. farmers found that those who used paraquat were twice as likely to develop Parkinson’s disease as those who didn’t use the restricted use pesticide. Other research has found that cumulative exposure over long periods increases the risk of developing Parkinson’s. Data published by Louisiana State University shows that a person’s zip code and proximity to cropland where paraquat is applied correlates with the risk of developing Parkinson’s.

Scientists believe that a deficit of the neurotransmitter dopamine causes Parkinson’s. Studies have demonstrated that paraquat can kill dopamine-producing nerve cells in the brain. Inhaling paraquat, which could happen if workers come into contact with aerosolized droplets during crop spraying, gives it a direct pathway to the brain, say researchers at the University of Rochester. However, paraquat could also end up in the brain after ingestion or skin exposure. The CDC notes that, once paraquat enters the body, it is distributed to all areas of the body.  Freya Kamel, a scientist within an epidemiology branch of the NIH, has said that research on the link between paraquat and Parkinson’s disease is “about as persuasive as these things can get.”

​
​Do I Qualify for a Paraquat Exposure Lawsuit?
Many individuals are filing claims against the makers of paraquat, alleging the restricted use pesticide has either caused the individuals to develop Parkinson’s Disease or that the individuals are at an increased risk of developing Parkinson’s Disease because of prior long term exposure to paraquat. Lawsuits are being filed across the country, both in federal and state courts. Some cases are class actions, where one plaintiff serves as a class representative on behalf of similarly situated plaintiffs.

Other lawsuits are filed by individual plaintiffs who are not part of a class action but are part of consolidated mass tort litigation that includes numerous individually filed lawsuits rather than one large lawsuit filed on behalf of many.

Common plaintiffs in paraquat exposure lawsuit are licensed applicators/users, agricultural workers who were frequently exposed to Paraquat on farms, and individuals who did not work on farms but lived on or near farms where they were subject to secondary paraquat exposure.

Who Is at Risk of Developing Parkinson’s From Long Term Paraquat Exposure?
Agricultural workers and their families are those most commonly exposed to paraquat. However, people living near farms and fields can also be frequently exposed. The following people are at high risk of exposure:
Farmers, farmworkers, landscapers, and agricultural workers
​Is There a Paraquat Exposure Lawsuit?
Unfortunately, many individuals have developed Parkinson’s disease as a result of long term paraquat exposure, including those who live near agricultural areas where the harmful chemical is used. The widespread use of the substance makes it especially unsettling, as many farmers heavily rely on paraquat without understanding its destructive effects. If you or a loved one were diagnosed with Parkinson’s disease due to pesticide exposure,  Our Nashville Paraquat lawyers can help you secure the compensation you’re entitled to.

What Is the Paraquat Exposure Settlement?
Syngenta knew the risk of their product yet failed to disclose it to the public, which allowed thousands of agricultural workers to expose themselves and their families to the risk of a life-altering condition. Those who suffer from Parkinson’s require consistent treatment to increase their quality of life, which is a significant expense to endure without proper compensation. However, by holding Syngenta responsible for their negligence, you can recover the medical costs, lost wages, and suffering damages warranted by your situation.

Does Roundup Contain Paraquat?
While Roundup does contain dangerous chemicals, it doesn’t contain paraquat. Crop resistance has lessened the effectiveness of Roundup’s active ingredient, glyphosate, which has led to the widespread use of paraquat in the agricultural industry.

Early Signs Of Parkinson’s Disease
Parkinson’s Disease is usually found in elderly people 60 years of age or older. It can also be hereditary and found more commonly in men.
If you are a farmer or work in agriculture, the toxins in Paraquat may cause Parkinson’s to settle in much earlier.
Have you been exposed to Paraquat frequently? Here are some early indicators you could be developing Parkinson’s in relation to the herbicide: ​
What To Do If You Notice Symptoms of PD
If you’re a farmer or someone who has been exposed to Paraquat and has oncoming PD symptoms, you should see a medical provider immediately. Seeing your doctor can help diagnose you to begin treatments and discover the root of the cause. If it is determined that exposure to Paraquat is the leading culprit, you can file a claim to seek compensation for help covering your medical bills and pay for emotional pain and quality of life lost.

Proposed Legislation
The Protect Against Paraquat Act has been introduced by Democratic New York Rep. Nydia Velazquez. The legislation would end all registration practices for the substance. In the Senate, Democratic New Mexico Sen. Tom Udall brought forward the Protect Children, Farmers, and Farmworkers from Nerve Agent Pesticides Act of 2019. Both are being lauded by The Michael J. Fox Foundation.

“The proposed legislation is meant to prevent the use of toxic pesticides said to harm U.S. children, farm workers, and consumers,” according to an article in Parkinson’s News Today titled “MJFF Urges Support for Bill Aiming to Ban Herbicide Paraquat in US.” “One insecticide the measure seeks to ban, organophosphate, has been shown to harm the developing brain of children. Another, known as neonicotinoid, is linked to developmental defects and other problems in unborn children, and is tied to a global collapse of pollinating insects like bees. In a major development for the Parkinson’s community in particular, the measure would also prohibit the use of paraquat, estimated to raise the risk of Parkinson’s by 320%. This herbicide has been banned in 32 countries, including the European Union and in China, the country where its primary manufacturer is based.”

PARAQUAT TIMELINE
Research on the link between paraquat and Parkinson’s disease is “about as persuasive as these things can get.” – Fred Kamel, scientist with NIH.
​